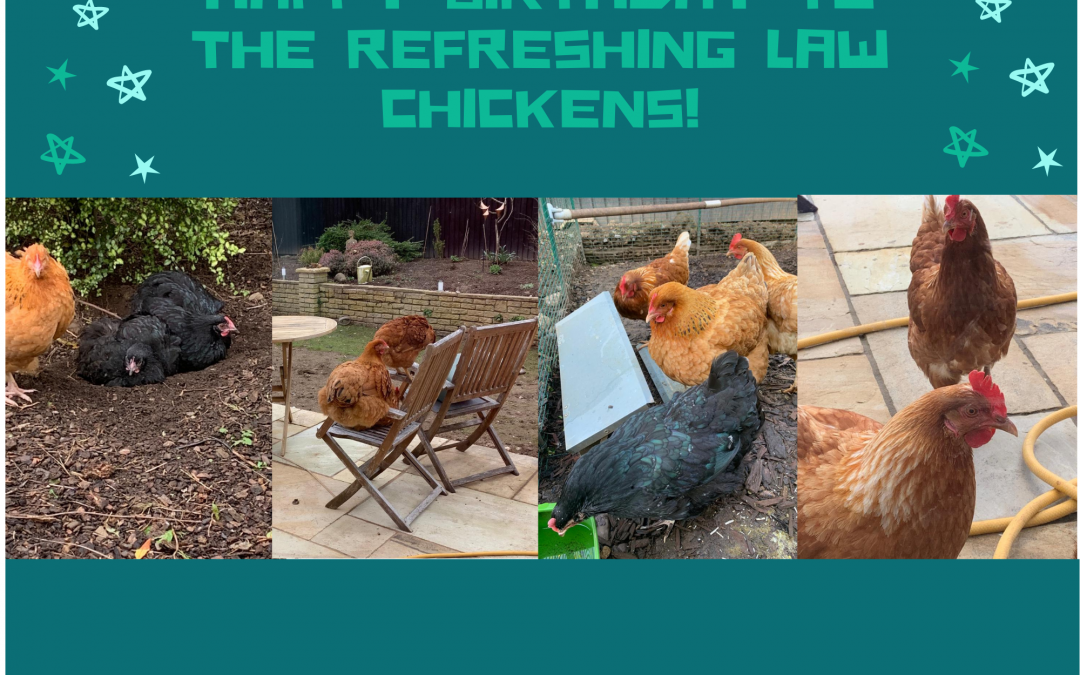 At the time that I redesigned our website a few years ago with the ‘employer’ section graphic of an egg box with cartoon eggs and a single cartoon egg in an egg cup for the ‘employee’ parts of the website, little did I know when I fell in love with that artwork that a couple of years later we would be offering clients eggs when they visit. Some people in the pandemic learned to make bread (this is still on our to do list), others got fit, we got chickens!

We started off with four, two Warrens, a Buff Orpington and a fine looking black one which has a real petrol sheen to her feathers. They were all named after famous event riders so they all have full names, for example, one is called Mary King and not just Mary and the fine looking one was named Princess Zara, after Zara Tindall (the Queen’s niece).

After a few weeks I became concerned about the size of Zara’s feet and that her plumage was starting to look particularly flamboyant. At one point I did tell her that although we are gender neutral in this household, for reasons involving the neighbours and crowing, could she please be female. One morning I heard the distinct sound of a rather croaky attempt at a crow, or at least a voice that was different to the other chicken noises I had become accustomed to (did you know that when they are truly happy, a chicken will make a noise that is a bit like a cat purring?). Sure enough, Zara turned out to be a ‘he’. Luckily a good friend rehomed him/her and we swapped for two others, so four became five chickens, famed primarily for their egg laying capability and indeed they are brilliant on this front.

What we hadn’t expected was them to have such a calming effect during what has been a tough year. When I am pottering around, tidying up their rather posh area (that has its own bunting) and I am there sorting out their food, clean water and collecting the eggs, I hadn’t expected anything like the calm that descends from spending a few minutes chatting with them.

I have learned that they see me now as their cockerel because I am the one that often is providing them with food and tasty morsels (they are the most spoilt chickens in the world: today they are having a lettuce, yesterday it was corn on the cob and they are partial to broccoli stalks. In the winter when it was very very cold, they were given a nice bowl of porridge!).

I also wasn’t expecting them to have such personalities. Lucinda Green and Ginny Leng, the Warrens are a nosey pair. If there is an opportunity to wander somewhere eg. garage door left open, door to the house left open, gate left open, they are in as quick as you can blink. The kamikaze attitude to life does lead to them doing things like getting stuck between the wall and a trough and having to be rescued. If you are trying to take a photo of any of the others, they will photo bomb and if you don’t feed them on time, they have been known to fly up and sit on the kitchen window and let you know.

Mary King is very shy to the point of deeply offended if I try to touch her and is much more aloof than the others – she’ll be the one who has gone off in a different direction, exploring on her own but quietly she is the leader. When I gave them a bowl of porridge she definitely told all the others off and they had to wait until she said they could eat.

The two black ones are Bantums so because they arrived later have taken longer to come out of their shell (excuse the pun!) and are completely devoted to each other. When Tina Cook was broody and so staying in to sit on her imaginary eggs, her sister Pippa Funnell was with her the entire time except when I was heard approaching with a bag of corn, in which case she flies down the ramp from their coop – sweetcorn definitely outweighs the risk to eggs in her mind!

Next time you pay us a visit, we will go the egg-xtra mile for you and give you a full egg box if you bring one with you.